Who Wouldn't Want To Sleep Here? 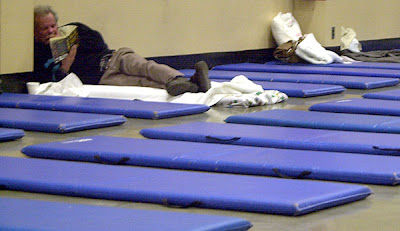 Casey McNerthney at the Seattle PI called me last night after being driven around around a bit by Sgt. Gracy to get today's story on homeless people refusing shelter. I like Casey. He's a good reporter who's done right by the homeless more than once. For some reason, however, my rather clear explanation of why people avoid shelter didn't really get into his story, although I do appreciate the bit that did.

City, county and federal officials need to do more, according to Tim Harris, executive director of the Real Change newspaper.

"To say that there needs to be more of an investment in services is a radical understatement," he said. "They spend money where they see value, and they don't think homeless people have that much value."

To be fair, "some homeless people" were quoted saying pretty much what I told him. People are afraid of getting lice, and shelters are demoralizing. City Human Services press flak David Takami gets some of the rest, although he seems to find it much more mysterious than it actually is. "Some don't want to sleep next to somebody else. Some people have mental health problems that make it an issue."

This is ball park, but doesn't really get to the brokenness of the system, and why some would rather just avoid it altogether. Both Takami and the police are quoted as saying "the goal is to help homeless people become self-sufficient -- paying bills and maintaining a home." Shelters, apparently, help people do this, and being literally on the streets, they say, does not.

This is fiction. Shelters don't have the resources to provide real services. Not most of the ones for single homeless people anyway. And many of the people they contain have been permanantly written off, never to come back. The system is radically underfunded and overcrowded, and fundamentally broken. To say that shelters are somehow "a pathway" to rejoining the mainstream is to participate in a collective fairytale that denies the reality of what's going on.

If McNerthney really wants to know why people don't want to be in shelters, he should spend a night at DESC on one of the mats on the floor, four inches from the guy with the deep cough that won't stop. If he's smart, he'll put anything of value in his shoes and keep those under his pillow. If he's lucky, he won't get any of the bugs that are around.

I used to only really hear that about lice and bedbugs at Union Gospel. It's been a consistent complaint for years, and apparently they either don't care or can't get it under control. But now I hear it all the time about DESC too. There's an infestation, and people don't want to go there.

To listen to Sgt. Gracey and David Takami talk, you'd think that the shelters have legions of social workers, and to walk in the door is to enroll in some sort of homeless makeover program, where one learns the intricacies of personal hygeine and money management, gains soft and hard job skill training, overcomes their addictions and mental illnesses, and is placed on a smooth road toward becoming a housed member of the working, if not middle, class.

Bullshit. They're warehouses for the broken, written-off, detrius of the global economy. There are not a lot of jobs out there for, say, a 49 year old black felon who lacks a high school education, or a 60 year old unskilled laborer with a bad back, or a border-line retarded thirty-year-old who's been on the street since he was fourteen and is now addicted to crack, or the woman whose customer service skills have been honed by fifteen years of nickel and dime street prostitution, and so forth.

So we pack them in where we don't see them, and offer the minimal conditions necessary to sustain life. Then we boot them out at 5 or 6 a.m., so they can disperse before the real citizens get downtown so they won't have to see the undiluted misery of so much human wreckage discharged to the streets for yet another day.

Large shelters are total institutions for those whom most people would rather not see. The line staff are heroic, but underpaid, overworked, and completely stressed. There is nothing reasonable about what's expected of them, and this translates to what they are able to do. The best of them are saints, but most are as human as the rest of us and become numbed to the extreme misery of what they see. Under these conditions, true empathy becomes unsustainable.

Those who have the wherewithal to fend for themselves outdoors often choose to do so. To me, this isn't a mysterious, inexplicable choice. It's a matter of finding personal dignity in the fact of everyday survival, as opposed to surrendering to dehumanizing misery and the loss of personal agency. If I were homeless, it's what I'd do. It's a rational choice.

If the city wants people to go to shelters, they need to invest in these places to bring them past the tipping point of offering more to homeless people than they take away. There are both physical and moral dimensions to this.

A decent shelter should offer some sense of community. There should be meetings, activities, and the sharing of food. Large, institutional settings don't lend themselves to this. They foster, instead, a sort of defensive isolation.

A decent shelter should be a homebase, where possessions can be stored and real respite from the hardships of the street can be found. They should offer some semblence of personal space. A real bed, for example, that one can return to each night, and at least a few feet from the next person over

A decent shelter should not restrict one's personal liberty anymore than necessary. One should not have to subject themselves to a 10 hour lockdown to sleep indoors.

A decent shelter should operate on a small enough scale for people to know each other. A decent shelter should have a client to staff ratio that gives people some small chance of getting real help. All most shelter staff have time for is the bare essentials, and barely even that. Basically, the priority is to see that no one gets hurt. This isn't a "pathway." It's a tar pit.

People who have a hard time sleeping on sheets with a threadcount of less than 300 don't get to judge homeless people who opt out of shelter. They simply have no idea of what they're talking about.

If the city wants people to go to shelters so damn bad, they should invest the resources to make them places people would choose to be. This isn't rocket science.

So forget the bullshit "helping" rhetoric. Very few people are being helped, and there isn't a lot right now to help them toward. The affordable housing that's supposed to be the solution isn't there. The waiting lists, if you can get on them, are years long. Try getting a gravely mentally ill homeless person some services sometime. You learn fast that things are very, very bad. And they are going to get worse.

If the city wants to help people who don't go to the shelters, here's an idea. First, do no harm. Then, why not just ask what they want? You might learn something.
Posted by Tim Harris at 7:14 PM

Dignity is connected to privacy. A right to not have one's vices held up to constant scrutiny. It sucks to be an object of someone else's idea of reform.

Tim Harris I gave you a blog award.
LINK

Timothy Harris, you are my hero, a real saint.

A few years back I was hired on as a temporary, on-call 'counselor' (i.e.: baby sitter) at DESC. The man who got me the job was Dr. Thomas Ozodi (Zod from God, I called him). The reason I mention this is because I've lost touch with him, and I thought maybe you might know where he is.

But, I digress. I'm entirely familiar with the situation at the Morrison Hotel. The rules were so prolix and contradictory that I, a man with 9 years of formal education past high school and an IQ that qualified me for membership in MENSA, couldn't understand them. I would characterize the human beings who sought shelter there as prisoners--people who were denied, not only dignity, but basic human rights.

There were arguments over blankets, shower rights, laundry, etc. And when they settled for the night, the stench of 300 dirty feet and numerous farts was unbearable. As you point out, there were many who had mental problems, and many who were just human predators (You don't have to be a Rothschild to prey on people for personal gain). There were alcoholics, drug addicts, women (and men) who were rape victims,and people who were physically abused.

It made me angry that human beings should be treated this way.

When Mayor Nichols remarked in one his sweeps--'it's just politics', I phantasized about physically removing him from his mansion, turning it into a shelter, and--as his ass struck the sidewalk--saying to him, 'it's just politics'.

Any way, Timothy, you keep mucking around in the gray area, and doing what you're doing. Seattle salutes you.

Tim, Thank you for printing the picture of the thin, too close to each other, mats on a hard concrete floor that some people call "Shelter". This is a picture of Seattle's shame. Ronni Gilboa