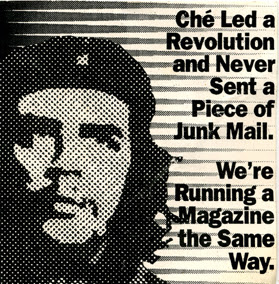 Street Magazine was the place where my new life began to come together. Al Nidle coaxed us into his world with visions of building Street into the next Rolling Stone, and we were happy to suspend judgment and come along for the ride. We lived on no money on the first floor of an Alston-Brighton rental house. Every one of us, in our own way, was crazy, although I was probably the sanest of the lot. A lonely old lady lived upstairs, and light brown patches spread across our ceiling from the urine of a hundred cats. Most nights, you could hear her moan and cry.

As publisher, Al was the guy who held the vision, opened the mail, and sold the ads. He was a grandiose narcissist with charisma to spare, and colored in each of the first 2,000 copies with crayon to complete the cover design. Al refused to work, and reserved the right to make his living off of our irregularly published magazine. He had a wife and an infant daughter who would visit occasionally, but was too self-absorbed to be of much use to them.

His forty-something friend David lived in a closet off of Al's living room-office-bedroom. David had a photographic memory, and could quote many of the books he'd read verbatim, but had trouble organizing his thoughts. I came to think of our conversations as intellectual pinball. While David had no formal role in the publication, he more or less functioned as Al's aide-de-camp. With his night-time dish washing job, he was the only one of us with regular work.

Jon was someone I quickly came to regard as an authentic genius. His bedroom was our production center and he'd painted a completely accurate nude self-portrait on his door. At twenty-two or so, he was a wildly prolific cartoonist, an amateur musician, and a talented graphic artist whose idea was to completely redesign each issue of the magazine so that it would never get stale. Jon drank too much and would disappear behind his door for days at a time. His creative jags, too, would go on for largely sleepless days on end. Jon temped a bit, but mostly spent his time working as an artist. A starving artist.

His bi-polar and anorexic mother Collete lived in a small bedroom just off of the tiny kitchen. She had yellowish hair, sunken eyes, and a quick wit, and would go in and out of psychotic episodes. My wife and I spent a lot of time encouraging Collette to eat, and making sure there were food bank groceries in the cupboard so that she might starve a bit less quickly.

Mine was the other room in the front of the house, which might have once been the master bedroom. I had a mattress on the floor and a chair, and kept the few clothes and other things that I had in a couple of boxes. I also still had the guitar that I'd bought in the Air Force, and we all played it. While none of us were any good, Jon had the most talent, and could do a dead on knock off of Devo's Mongoloid. I worked nights as a proof-reader at Stone & Webster, a huge engineering firm located near South Station. This paid better than other temp jobs I'd had, but I only got about twenty hours a week.

The second month we were there, Al took everybody's rent money and spent the $600 on a used Mac Plus without asking. This, with its two megs of RAM and 20 MB hard drive, was our only computer. Up til then, we'd been producing Street by sneaking into the Harvard computer lab. They rarely checked IDs and didn't seem to care if we were students or not. Since we still didn't own a printer, this was where we'd run the pages when we went to press.

After that, I don't think we ever paid rent again.

There was serious discussion of staging a break in of a downtown office that we knew of to steal their state of the art Mac IIci computers and laser printers. The plan involved explosions and flares to distract the police while the rest of us stealthily made off with the goods. Fortunately, we all got cold feet when it came time to actually make the heist.

We were working on our second issue together when, on October 19, 1987, the Dow lost $500 billion in a single day to add up to the biggest stock market crash in history. Our cover became a soup line with Jon's caricatures of various Boston personalities dressed in rags. "We're having a Great Depression" the tag line read.

There was a tent city in Cambridge in a big empty lot near the Necco candy factory on Mass Ave. I'd go there to hang out and got to know a few of the homeless leaders. There was always some sort of a high drama crisis unfolding. I tried to be helpful, but they didn't have much use for me. I was there as press, and did what I could to tell their story.

We saw ourselves as the gonzo documentarians of the impoverished urban lunatic fringe, and were well-positioned personally to understand the subject. Al had this vision of Cambridge as the Haight-Ashbury of the East Coast, but two decades later, and with homeless people instead of flower children.

Jon went to work developing an ad kit for Al, and various other bits of marketing paraphernalia. We had tons of heart, and Al and Jon fed each other's mania, but we didn't have the first idea, really, of what we were doing. Our Ché stickers, for example, invoked the signature likeness and read "Ché led a revolution and never sent a piece of junk mail. We're running a Magazine the same way."

The name of our publication was nowhere in there to be found. As far as we were concerned, branding was something that happened to cows and horses in Montana.

Eventually, an eviction notice was posted on the front door. We studied it carefully. The language was makeshift and it seemed to have been run off on someone's personal printer. If it didn't come from the Sheriff, we decided, we weren't all that worried. By now, it was January. The gas heat was shut off, but the electricity and water, which regularly froze in our bathroom sink, remained. I started spending the colder nights at Carolyn's place out in Jamaica Plain.

By then, we at Street Magazine central were beginning to hate each other. It became clear to Jon and I that what little money the paper raised was going directly to Al, who treated the paper's bank account as if it were his own. We'd spend hours working out decisions between ourselves, and then Al would just do whatever he liked. Slowly, Jon and I moved toward a coup.

The name, we found, wasn't trademarked. There was nothing to prevent us, the editor and art director, from ousting the publisher altogether. I was the primary architect. We plotted in bars and coffee shops, kept our plans to ourselves, and saved the money from our jobs to make first and last month's rent in a new place. Once we located a second floor walk-up near Somerville's Davis Square, we swung into action.

One sparkling blue day in February, while Jon and I were both at work and Al was out of the house, Carolyn and Collette put the Mac Plus in its little carrying case, stuck it in the car trunk, and drove away from the Alston-Brighton apartment for good. Jon and I broke the news to Al. He was off the masthead. His warlock friend Daemon put a curse on us. For all I know, it worked.

I have to say that I regret what I did then. Although the computer was purchased partly with Tim and Jons money, stealing it was not the right thing to do. I'm relived to say that was the extent of my participation of this "coup"

This is a very interesting story, please keep it up!

Which part? The bio, or the fight with my wife?

Seriously, I'm actually on my way back to Boston, right now, where I'm planning on doing some research to recover memory and documentation of my former life.

This is fascinating...any plans for a book?

I must say I could not stop reading the episodes/chapters. It wqas very freakin' interesting. I hope you do a book out of this.